True or False: An approximately 4% yield from a leveraged micro-cap is too hot to handle. Often that will be true. But Entravision Communications (EVC), a media company that serves the U.S. Latino community, is a much better story; current income, demographics-driven growth, and less risk than one might presuppose. This is a reprint from my P123 Spotlight blog. 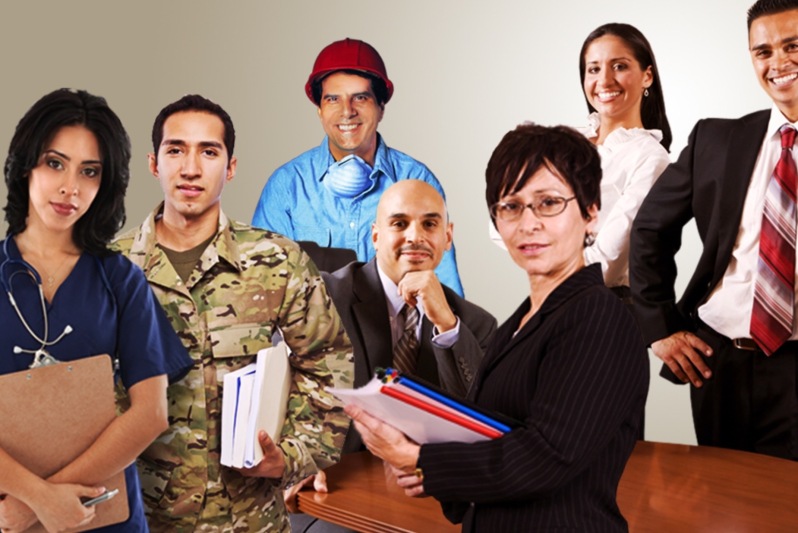 Why this Stock is Being Considered

It’s important, before you start to read about or evaluate a stock, to know why the it came under consideration be comfortable soundness of those reasons. Entravision Communications (EVC) showed up in the Mico-Nano Cap screen I created on Portfolio123 that searched among the smallest (yet still tradable) stocks for those whose fundamentals, although not necessarily up to large cap standards, still look acceptable, enough so to justify a focus on size and the inherent qualities of very small companies. Details of the screen are described in a 6/18/18 blog post and an approach to assessing the sometimes-challenging stocks that can appear on a list thusly created were discussed in a 6/21/18 follow-up.

That it’s an intriguing income play had nothing to do with the screen and comes as an unexpected bonus.

If you live in the United States and speak Spanish as your only language, or as a language that’s important to you, and if you watch TV or listen to radio, you’re undoubtedly familiar with Univision and Telemundo. Those are the big-time networks that distribute much of what you’ll view and listen to. The name Entravision will probably be unfamiliar, but Hispanic people in many major locales in the U.S. are probably regular viewers or listeners of Univsision programming aired over TV and/or radio stations owned by this company. In markets served by Entravision, the Unavision network with which its stations are affiliated has a 63% share of Spanish Language viewers age 18-49. 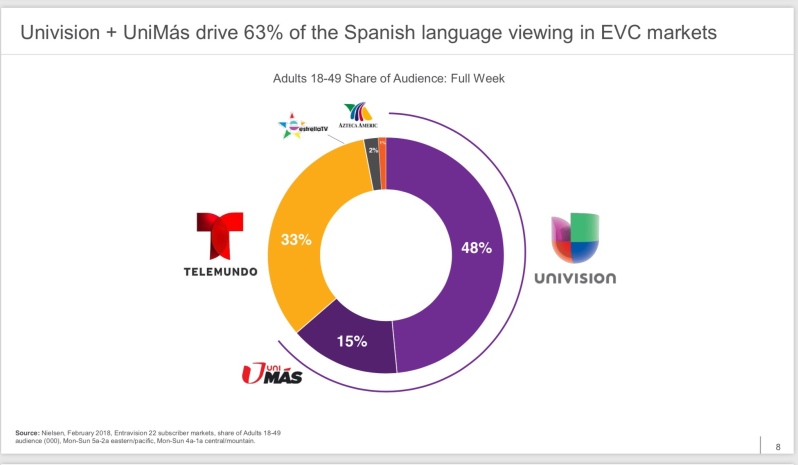 Spanish-speaking people have been in the news a lot lately, but investors need to look beyond here-and-now hype and focus on the big picture. And regardless of what this talking head or that shouting head says, here’s what’s important (source: Entravision’s latest 10-K SEC filing):

Political shouting and arguing and hand wringing is all well and good but I believe that at the end of the day, Mr. Market ultimately marches to the cadence established by Dr. D (Demographics). And when we hone in on the portion of all this that’s relevant to companies whose revenue base is tied to advertising, here are a few more beats:

Based on this, you’d think it would cost a premium to advertise to Hispanics. And if you think this, you’d be wrong. It costs less. I guess this means the equity market is’t the only one that offers inefficiencies from which one can profit.

That may not show up in each and every year-over-year quarterly advertising sales comparison. And indeed, current comparisons are cold, dampened by what management refers to as a “wet blanket” effect of Trump’s immigration policies on markets along the U.S.-Mexico border, and some programming issues(including the airing on the World Cup on Telemundo in 2018, rather than Unavision), a periodically inevitable aspect of the media business.

But if you’re willing to refrain from obsessing over each zig and zag and prefer to focus on big trends, investing in companies whose revenue bases are tied to this Dr. D inspired trend strike me as a pretty good idea. And by the way, if you do like to play the comparisons game: Given that investors need to look forward, you may want to consider the bump likely as we move closer to the 2020 political spending season.

In my 6/21/18 post describing challenges one can encounter in evaluating stocks that appear in a screen, I pointed out that even factually correct data can lead to distorted conclusions and also mentioned my estimate that “Noise” accounts for minus 335% of EVC’s market cap/share price. As it turns out, EVC is a great example of the way 10-Ks and some good old fashioned Graham & Dodd type analysis can solve even the densest of numerical puzzles.

My estimate of Noise is based on a very simple formula. I start with Net Operating Profit After Tax (NOPAT) and divide by cost of capital. Despite the hullabaloo we get in MBA Finance programs, cost of capital is really a number best pulled from one’s gut or channelled after some meditation. Om: I used 12%. For tax rate, we could plug in an actual, or we can meditate our way to something within hailing distance of what we think might be a sustainable representative number; leaning toward the latter, I used 21%. (If you haven’t already made peace with the art, as opposed to science, of investment analysis, now would be a great time to start — we’re looking toward the future, so sensible approximations always trump necessarily-backward and always-futile efforts at precision).

The main variable is operating profit. That should be easy. We can look at the latest trailing 12 month figure and use that as a basis for a standstill-type valuation, much the way we use interest as the basis for valuing a bond. And as with bonds, we divide this visible income by our best evidence of governing rate of return (the cost of capital for a stock or the market rate of interest adjusted for credit quality and term for a bond). So to wind up with a negative Noise estimate, we’d have to say the stock is trading for less than standstill value, and that’s do-able only if we expect operating profit to fall.

That’s exactly what we expect for EVC; and a huge decline at that. As noted, there is some ongoing pressure in EVC’s ad sales, but that’s not the driving force here. It’s a massive windfall-type operating income that occurred in 2017, when, as part of a government program to free up some unused broadcast spectrum to accommodate 5G (Did you really think 4G was the final destination?), EVC netted a truckload of cash (and operating profit) by parting with some spectrum (and letting go of some small stations). We can’t and don’t expect it to be repeated in 2018 and beyond (but wouldn’t complain if it is).

There was also another lesser distortion of 2017 operating profit. EVC is in the process of building up a Digital Advertising Platform business that empowers advertisers to deliver digital ads to targeted audiences across a variety of digital platforms, which strikes me as a good thing to do; given the way TV and radio are changing in response to evolving audience consumption behaviors, it makes sense for EVC to plant a flag in future-land. But a significant 2017 acquisition in this area, Headway, boosted operating expenses ahead of eventual contributions to revenue.

Recasting 2017 operating profits to a more “normal” level by eliminating the impact of the Spectrum rights windfall and the Headway acquisition, I now estimate that Noise accounts for 26% of EVC’s market cap/stock price.

For a company like this, a micro-cap in an evolving area that’s hard to estimate with precision, 26% is a very tame number for Noise. I estimate 32% for Walmart (WMT)! Bottom line: Although the conventional valuation ratios are mostly out of whack due to the 2017 unusual items, I think one can make a good case that Entravision is undervalued.

Consider, too, one of the few valuation ratios that can be compared to others on an apples-to-apples basis; price-to-sales. For Entravision, this is 0.77 (when tabulated using trailing-12 month sales). The Industry and S&P 500 medians are 1.34 and 2.68 respectively. If Entravision’s debt leverage was atypical, I’d compare Enterprise Value to Sales, but that’s not necessary here since its Total Debt to Capital Ratio, 0.87, is in line with the 0.82 Industry Median. (By the way, EVC’s debt ratio could be much lower if it would use the cash it got from its 2017 sale of spectrum rights to pay down debt, but the company is holding this as “restricted cash” under IRS provisions relating to “like-kind exchanges,” thus suggesting purchases of additional media properties are part of the company’s plan.)

And finally, we come to the most tangible measure of value, the dividend . . . .

The stock’s yield is in the neighborhood of 4%, which is well above par relative to stocks in general, micro-cap stock, and media stocks. But we can’t pull the trigger immediately. We have to consider the safety of the payout. Table 1 shows where dividend payments fit in the company’s big-picture cash-in-cash-out profile.

Obviously, though, the 2017 spectrum sale windfall distorts the recent figures. Table 2 reflects my adjustment to 2017 and TTM figures to eliminate the unusual items discussed above.

Data from S&P Compustat via Portfolio123.com and reflects Compustat standardization protocols. TTM = Trailing 12 Months. 2017 and TTN Cash from Operations adjusted by author to exclude the impact of unusually large sales of spectrum rights.

Clearly, the company can afford to pay, and even grow, its dividend and do what it needs to do for the business; make acquisitions and/or internally develop. (With regard to acquisitions, the company has plenty of borrowing power as well as the restricted cash which, as far as the IRS is concerned (and the reason why Entravision is not being taxed on its gain), is earmarked for purchases.

I have no idea what, if any, plans the company has for dividend growth although its worth noting the quarterly dividend was raised from $0.03 to $0.05 in the 2017 third quarter. But even if no near-term increase occurs, the current yield coupled with the level of cash coverage we see here makes this a pretty good income play.

Was it luck (the unusual spike in 2017 operating profit) rather than foresight that got Entravision into the screen I used? Yes, probably. But it’s not as if this company is a stranger to the kind of screens I create. I recommended it at 1.71 on 3/15/12 and ignored the paper loss to do so again at 1.21 on 12/15/12 as a result of its appearance in the different but similarly-themed screen I was using when I ran the old Forbes Low-Price Stock Report newsletter. I recommended profit taking at 6.63 on 7/19/13. I suppose the stock has been marking times since then waiting for me to return. 🙂

Anyway, screens always produce happy aberrations and unhappy aberrations: It’s the nature of the beast and my testing, observations and long real-money experience make me comfortable saying they ultimately balance out over the long term. And where, as here, the screen was offered as an idea generator rather than a fully-automated model, I see no reason to complain.